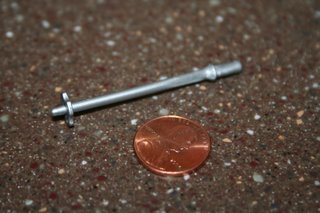 Last week Zach told me that when he was playing with Dalton and Asher back in their room, that Dalton swallowed something. I asked Dalton about it and he admitted, yes, he had put something in his mouth, tried to spit it out, and “It just went down, momma!” I admit to being pretty maxed out with Chris being gone and even after he confirmed Zach’s story, I didn’t think too much about it again. I mean, I reasoned with myself, if he could swallow it, then it should be able to make it out the other end, right? Well, on Thursday evening, Zach came to me and brought the mate to the original ‘something’ that Dalton swallowed. It was a miniature ski pole, meant for the boys’ Playmobil guys. When I saw it I panicked. This thing was huge, 2 1/4 inches long and way too big to fit down a 4 year old’s throat. But, I guess I always knew my boys were special. I called the Dr. first thing Friday morning and thankfully, they were as blown away as I was. They got me in that afternoon and we had an xray taken to see if we could see the little ski pole making it’s way in Dalton’s gut. Well, we couldn’t find it, so either that means it didn’t show up, or that it’s already made it’s way out. Let’s hope it’s the latter 😉