Halloween was so much fun!

To be honest, I love the preparations for Halloween, buying candy, deciding what the kids are going to wear, the fact that Halloween sort of heralds in the holiday season. But I am not crazy about Halloween itself.

It hasn’t helped that the last 2 years Chris has been gone.
And it has rained.
And been cold.
But this year the weather was perfect.
And Chris was home. 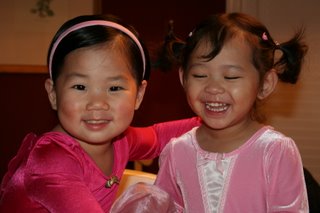 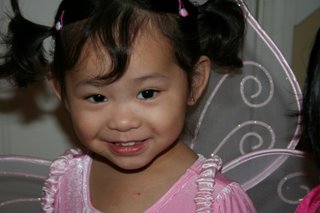 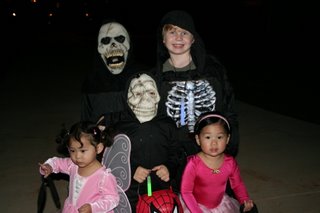 Things were going awry until we actually left for trick or treating.
Dinner was in a rush, the kids didn’t want to eat.
No one could find all the pieces to their costumes.
The boys were fighting over which skeleton mask was theirs.

But as soon as we left the house things took a big turn for the better. We live in a great neighborhood for trick or treating, houses close together and no hills or long driveways. So it was a short trip to our first stop. Isabelle realized quickly that all she had to do was hold her bag out and that candy would be deposited, no questions asked. Soon she was leading the pack, holding daddy’s hand and saying, “Run!” with her little wings flopping on her back as she went. 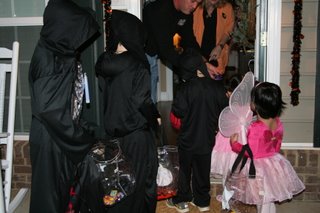 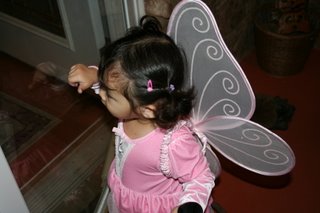 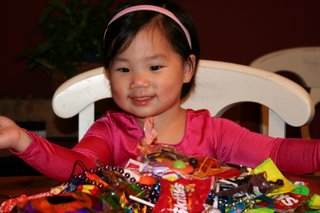 At every house she pushed her way to the front and, even though the boys had rung the doorbell, she insisted on knocking on the door. She even started to say, “Trick or treat!” in her endearing Isabelle way.

Sophie loved it too and she was intent on carrying her bag, even when it started to get heavy. She and Belle outlasted the boys who began to complain about their feet hurting or some such nonsense…

Honestly, when I was a kid, we walked 1/4 mile between houses and when we finally got home, at least 3 hours after we started, we hovered over our newly acquired candy as if it were the last sustenance on earth. Kids these days have it too easy.

Only the girls had the true spirit of the evening and were happy to continue on to the very end.

After we got home everyone poured over their booty and sugared up good for the evening.

I don’t care much for the scary part of Halloween, but you gotta love the candy.