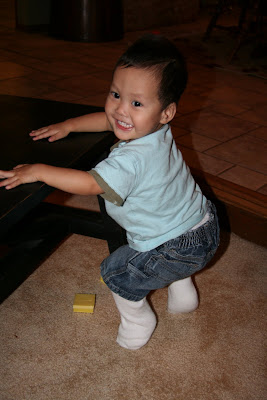 Only 5 more days until Shepherd’s last casts come off! I can’t believe it’s already been almost 3 weeks since his last casts were applied… I guess being busy has been a good thing, it’s made the time fly! I wonder if the 3 weeks have gone that quickly for our little guy? He has coped SO well with the casts, in fact he amazes us frequently with all the things he can do in his casts. He stands now, holding on, and is able to pull himself to standing quite easily. He has started riding a little tricycle also, but with a twist: he sits behind the seat (sort of on the rear ‘fender’) so he can locomote with his casts on. He crawls so fast and furiously he wears holes in the knees of his socks (used to protect his casts) in an afternoon… he definitely gets around. He is crawling up and down the stairs now (not so much ‘crawling’ down as a very well planned, slow-motion ‘falling’ down the stairs on his tummy). I am so excited to see what he does once his casts come off… will he be “off to the races” or more hesitant like Jude was? I expect his feet will be extremely sensitive for at least a few weeks. Dr. Morcuende said that children who were walking before castings usually take longer to re-learn to walk after casting, due to the fact that they are not just learning how to walk, but how to walk in a whole new way.
Check out the pics I posted in the sidebar of Shepherd’s progression… I can’t believe it!