Why, right here. At home.

Then why haven’t you been posting? At all?

Uhhhh… because, right here at home, my life has spun ridiculously out of control.

Actually, no one has inquired into my whereabouts, I’m just hoping speculating that someone might have noticed my absence? Maybe?

But I digress. I did end up getting quite sick on Thursday, last time I surfaced in blogger world. It wasn’t the lay- on- your- back- and- pray- you- don’t- vomit sickness, but I was quite achy, miserable and queasy. And chasing down caring for 4 little ones didn’t help me get much rest. Thankfully I was feeling some relief by Friday morning, just in time for Asher and Dalton to get sick. So they stayed home from school. (Asher wasn’t really sick, but if anyone in our family gets a stomach bug, he’s gonna get it. I like to think I was just protecting his classmates from a potential excorsist-like experience.) And Sophie stayed home as well, for good measure. She wasn’t sick (the girl honestly does. not. get. sick.) but she wasn’t her usual self. So my Friday was busy. Nay, my Friday was insane.

Chris arrived home Friday night… a sight for all of our sore eyes. We must have looked a mess, I’d purposefully avoided all contact with my reflection in the mirror, and I know the house was a mess. But he seemed to be glad to be home nonetheless. Everyone was suddenly better once dad was home, a harbinger of brighter days ahead. The weekend was great… basketball games, dossier stuff, house cleaning, grocery shopping, errand running, worshipping and working on my super secret-y project and we still had time to just sit on the couch, hold hands and watch a movie. Chris had to leave again on Sunday afternoon and we all stood in the driveway, waving as he drove off (not really, but it paints a pretty picture, doesn’t it?) “At least we’re not sick anymore,” I thought. “I can do this!” Ahhh… such naivete.

As is customary when Chris is away, Asher and Dalton slept in my bed Sunday night. (You know, just so they feel safe when daddy is gone.) Ridiculously early Monday morning Asher woke me up, in my bed, telling me he’d just thrown up. In my bed. It’s been a downhill spiral ever since. The poor child is the most pathetic creature when he’s sick. He just lays. Vomits and then lays. Only occasionally requests a refill in his purple Sponge Bob sippy cup. Lets his cool washcloth get just about dry before letting me wet it again for him. He must have thrown up a dozen times, all without moving from his spot on the couch. Thank goodness for leak-proof trash can liners and the fact that the trash man came today instead of yesterday. At one point he was quite hungry and after a lot of thought, he decided he wanted a pop tart. It was against my better judgment but I dare any momma with a heart in her chest to have denied that kid. A pop tart it was. Sadly, the pop tart made it’s way back up and into the trash can. I’m afraid Asher feels now about the Cookies ‘n Cream pop tart the way I feel about Osc@r Meyer hot dogs. And Chris feels about half-moon cheese and canned peaches. The scars we carry from childhood, well… just ain’t pretty. 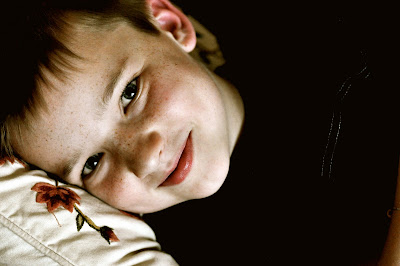 My sweet boy is still able to grin for me. Okay, he was watching Sponge Bob at the time, but he was smiling for me. Things are looking up. Let’s just hope we don’t wake up to someone else throwing up tomorrow.