I gotta say, having gotcha day in the middle of the afternoon made for one long day. In fact, by the time it was time, Asher and I were beside ourselves with excitement. And pit sweat. And nausea. At least I was. That is one thing that doesn’t seem to change, no matter how many times I’ve come to China to meet and bring home our child… it’s outrageously exciting, fantastically wonderful and seriously butterflies-in-the-tummy inducing.

I’d rehash the details of the day before we left for Civil Affairs, but let’s be honest, no one cares about that at this point.

Yeah, I thought so.

We arrived at Civil Affairs before Vivienne. I think we only waited about 10 minutes, but it felt like an hour. It did give me time to get my camera settings adjusted and give Asher a quick lesson in manning the video camera.

The moment finally arrived. In she came in the arms of a caretaker from Guilin. She looked very frightened, but curious. Then she noticed the play area in the room and hightailed it over as fast as her sweet legs could carry her. She walks, which is wonderful news since based on her last update she was not walking yet. So, understandably, she toddles like a one year old. 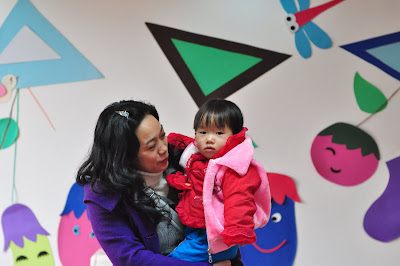 I managed to get her attention with a lollipop, as she sat on the rocking horse. Then, she let me hold her. No tears. Barely a sideways glance. I gave the guide the paperwork and, after I’d had my questions answered, we left for the hotel.

Still no tears. Not even a whimper.

We did a bit of paperwork, then the guide left. We pulled out some stacking cups and played a bit. Those, as usual, are a huge hit.

Then the lip came out. She was so still and quiet, I thought she was being silly. But the tears began to silently roll. And I was very much relieved.

She cried a bit but allowed me to hold her and rub her back. We pulled out the bubbles to try and lighten the mood after a while, but she wasn’t having any of those wet, drippy things. So we decided to try the tub and see if she was interested in climbing in. Sure enough, armed with her stacking cups, she leaned over the edge of the bubbly tub and threw in her cups. Soon she was splashing and trying to transfer water from one cup to another, all the while trying to keep all 7 cups close by. 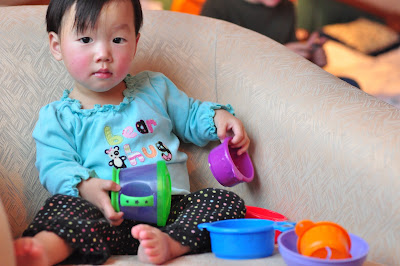 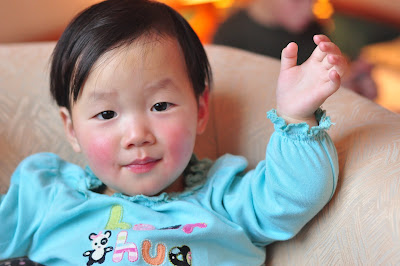 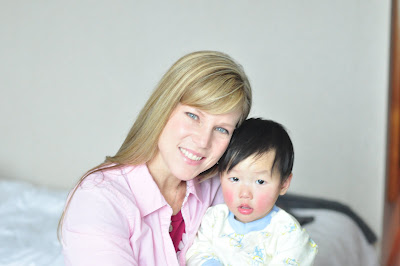 Once she was dry and dressed, we snuggled (or at least I snuggled her) while she watched a Baby Einstein DVD with a cup full of baby puffs (thanks, Holly!) She has wonderful use of her hands, but her thumbs seem relatively weak. She works very hard to do anything she sets her mind to, but I imagine she’ll have some limitations eventually. What she lacks in ability, she makes up for in smarts, though.

Then, when she was done with her puffs and two milk boxes, we pulled out the squeaky shoes I picked up for her at the grocery store. She tried to pretend like she wasn’t interested, but then put her foot out to try them on as soon as I showed her they squeaked. That’s my girl.

Right now she’s sitting on my lap, stacking her cups and trying not to smile too much when I knock them over. And occasionally making sweet baby words that I sadly have no ability to comprehend. But just the fact that she’s feeling comfortable enough to sit in my lap and babble to herself speaks volumes.

To everyone who has been praying for us, thank you so much. We feel covered in a very big way.