How cute is this little booger?? If he ain’t nothin’ else, he’s incredibly handsome. But he is more. So much more. 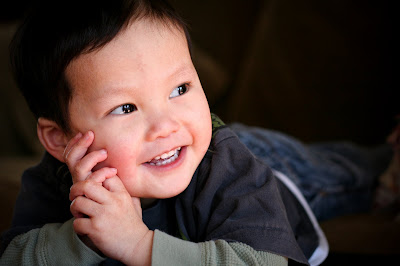 Shepherd has come an incredibly long way since we first held him in the Guangdong Civil Affairs office, almost 8 months ago. In fact, it’s hard for me to go back and watch the videos we took of him in China, he’s such a rag doll! At the time, I knew he had some significant delays. But for some reason, looking back now, makes me sick to my stomach. It’s so good to be 8 months down the road looking back, I gots to say!

Shepherd is now officially walking everywhere! We decided, right around Christmas time, that we were tired of throwing out his jeans because of all the holes in the knees… it was time to go upright! So we committed to encouraging him to walk instead of ‘uber-crawling’, his super fast way of locomoting that he preferred to walking. By the time I got back from China he was walking and hasn’t stopped since. And he is pumped to be like his big bro Jude. Pretty cute. 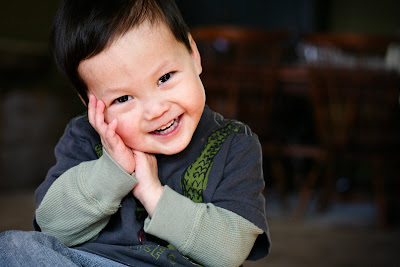 Shepherd is talking like crazy as well. We had his hearing tested in October and weren’t surprised to find out that his hearing was significantly affected by fluid in his ears. In fact, we were told after an in-depth hearing evaluation that his hearing was about 35% less than it could be. In November we had tubes placed and while there was no lightning – bolt language acquisition, we did notice him begin to talk more. But just in the last month, his words have lost the nasal-y, poorly enunciated quality and now they sound like real baby words! Like “me do it!” and “daddy bye bye” are, amazingly, coming out of this little guy’s mouth! We are so thrilled to witness his progress… we were told that children from his particular orphanage speak very little, due to the fact that they were never spoken to by the caretakers. Heartbreaking.

He is also beginning to gain weight. It’s so nice to, at last, see a bit of additional weight on his tiny frame! He had giardia when we brought him home and we mistakenly believed that once we had completed the Rx, that things would resolve and he’d begin to gain weight. Not so. It has been at least 6 months since he was treated and he is just now beginning to be able to digest food normally. Evidently, long term giardia can really leave your gut a mess. He is a good eater, not so much for quantity but for selection… he’s not picky at all. It’s just a matter of being able to sit there long enough to wait for him to chew up enough food to actually count as a meal. And we still give him 2 bottles a day for additional calories. We add a good bit of heavy whipping cream for additional fat in his diet and it has really helped. Must be nice. All I’m gonna say ’bout that. 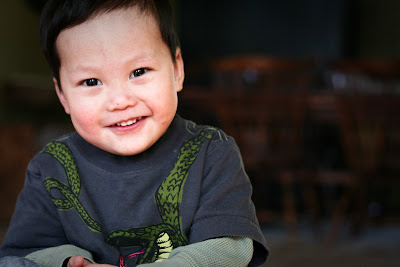 Shepherd loves his towel. In fact, if he could, he’d totally be a Linus. We have managed to limit his ‘towel time’ to naps and bedtime, but it has been and continues to be a favorite of his. Good thing that just any old white kitchen towel will do! He also loves his brother’s train set. He and Jude spend hours (okay, really about 15 minutes at a time, but it’s like hours… in toddler-time) setting up their wooden train tracks on the floor. Of course, fighting ensues sooner or later and we have to break up the clonking- of- each- other- on- the- head- with- a- train. But Shepherd is definitely learning to hold his own and we know that the two of them are going to be big buddies. Someday.