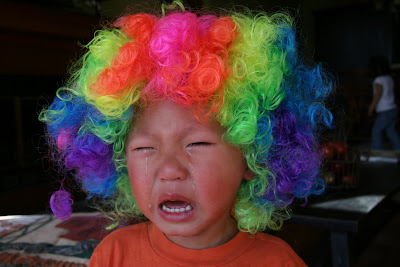 I lovingly encouraged Jude to commit to wearing this hilarious awesome wig for Halloween by adding that if he were a ‘clown’ I’d let him carry a few of his favorite sidekicks: balloons. He happily acquiesced with all of the halloween section at W@lMart as witnesses, and we then happily trotted over to the party favor section to pick out balloons… his choice. Somehow, possibly due to some horrid dream he had about said wig while napping, he has refused to wear it, nay even try it on, ever since. At least without a lot of tears.
I’m thinkin’ the wig was a bad idea.