I have 5 sons and 3 daughters.

When we started for Isabelle in 2004, we had 3 sons and 1 daughter. So it was a logical conclusion that we would be going to China for a girl.

I guess I never put much thought into it, a daughter it was to be from the start. Sophie, who came home next, captured my heart when I saw her precious face on a special needs list, so we never even spent any time debating the “boy or girl” issue. But then came Jude. When we initially thought about going back for our third child from China, in my heart I was thinking it would be a girl. Honestly, that was without much thought on my part. So when God started laying boys on my heart instead of girls, and I felt myself resisting, I had to ask myself, “Why am I so stuck on adopting a girl?” 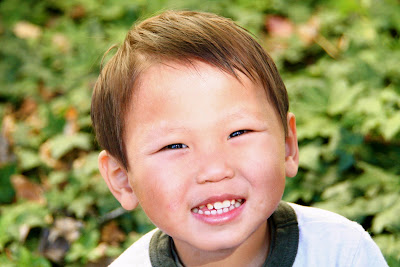 This is not a subject that many discuss in the circles of adoption, and I assume it is because it is of a sensitive nature. But I think it’s worth the time and energy to get to the bottom of the discrepancy between boys and girls being adopted from China. At least in my own house. Initially it appears that of course, there are way more girls waiting in Chinese orphanages. And this may be the case. But I do not know now, nor do I think any of us will ever know, for sure. What I do know is how many boys there are on SN lists. By a huge margin, families are waiting to bring home little girls from China, whether through the SN program or the NSN program. And I am certainly not judging, I am one of those that was in line for a little girl. At the time we began our first adoption, it was for a NSN girl, ayap, thankyouverrrrymuch.

But things have a way of changing. And God has a way of whispering to your heart in a way that is undeniable, no matter how hard we might try to ignore it. And what He whispered when we were going back for our third child from China, I must admit, I really did not want to hear.

It didn’t happen all at once, but I began to find myself looking more at the faces of the little boys on the SN lists. Then I’d catch myself and my head would be filled with questions, concerns, that hadn’t haunted me when we’d been going for our girls. “I can see myself with Chinese daughters… but a Chinese son??” I know, it’s ugly. And I knew it, but that question and others still swirled in my head. “What would he look like?” and “Would he even like me?” were others that plagued me.

But I pressed forward, seeking His plan and it wasn’t long before those questions echoed less and less in my head. And my heart was feeling more and more like there was, indeed, a son waiting for me in China. What would he look like? What would it be like to be his mother? Would he and I be able to relate when he became an adult? I still had these thoughts, but the fear was replaced by genuine curiosity. Sort of like when you’re pregnant and spend countless afternoons wondering about the little person that you have yet to meet, but think about constantly.

When we received Jude’s referral, fireworks did not go off. Not even a little lone firecracker. How could we know this was our boy? We prayed and I told Chris it was up to him. I didn’t trust myself to make the right decision for the right reasons. Chris woke up the next morning and read from Hebrews 11. And he knew. Jude was the one for us. Fast forward to China in June 2007. Again, as thrilled as I was to finally hold the little bundle we’d been longing to see, Jude had some issues. His scalp was covered in a fungus. His feet were horribly twisted, his ankles were bruised. His head was completely flat across the back from having to lay in his crib all day. One of his eyes did something funky. And he couldn’t stand the sight of me. But he was still my son, whether I felt like he was or not.

Sometime between then and now I have fallen completely and utterly in love with that boy. My heart is so full of him. When he wakes up in the morning, I adore seeing the smile spread across his face when he sees me. And when he’s tired or scared, I delight in being the one in whom he finds comfort. Truly. ‘Love’ doesn’t seem to encompass all the feelings I have for that boy. Our AFO-wearing, athlete’s foot-sportin’, Thomas-the-tank lovin’ boy. Not sure when it happened exactly, but all those feelings I had are ancient history now. And all those questions that I worried about and then wondered about have fallen away into nothingness. I couldn’t care what he looks like when he grows up. Or if he’ll like me when he’s a teenager. Of course, I care, but in the same way that I care about those things for each one of my children. I don’t actively think about it. All I think about is that I want them to be happy. Healthy. And I’ll do anything and everything in my power to ensure that.

My guess is that most of you are probably thinking that I sound like such a jerk for having those thoughts about my sweet boy, those concerns that were completely unfounded. So superficial! So trivial! I’d have probably thought the same thing if I had read this a few years ago. But if by reading this, just one person considers listening to that tiny voice in their heart that might be whispering ‘boy’ instead of ‘girl’ then a jerk I will be. I’m good with that.