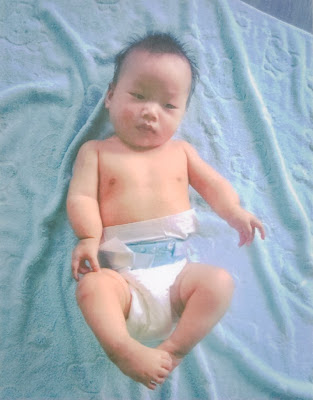 I have received quite a few inquiring emails regarding Vivi’s special need, specifically her arm deformity. We have purposefully not identified it on the blog, because we really don’t know what ‘it’ is. It is not arthrogryposis, that we do know. It isn’t a banding syndrome, either. We know her hands are quite functional and from her reports, she is able to do all sorts of adorable things with those precious hands. Which is wonderful news for her.

But there are some things that we will have to wait to find out. One is whether or not Vivi has a form of dwarfism. We were told early on that this was a possibility, before we even reviewed her file. And honestly, we are okay with that. Now, I’m not gonna lie… dwarfism was not on our short list of SNs we were open to. And it wasn’t on our long list either. When the friendly lady at WACAP mentioned the possibility of dwarfism, I was initially taken aback. For a moment. But when I called Chris, and told him what she’d said, he replied, “Oh! We’ll have a shortie, then!” It might not be the most PC thing to say, but it was one of the most tender and compassionate things to come out of the mouth on that big ol’ man ‘o mine. And ever since then we’ve simply accepted the fact that our little girl might be just that: a very little girl.

We have been in touch with not only our boys’ orthopedic surgeon, but also a geneticist who is very interested in Vivi’s case. Between the two of them, they have requested a laundry list of x-rays which, if China consents, will help us ascertain much more about her condition. We do know that she is relatively short. And that an arm deformity and clubfoot often occur together in a certain form of dwarfism. But she is missing some key features of that specific type. Another form, that is much less serious, occurs with a similar arm deformity, but not usually with clubfoot. This form usually just manifests itself as short stature: a normal sized body with shorter arms and shorter legs, and without the cranio-facial features typical of achondroplasia (the most common form of dwarfism). Or, she might just have an arm deformity and clubfoot, and that’s it. And it might not be until we have her home that we have any idea which of these (or something completely different) is the case for our Vivi.

Thankfully, both Chris and I are absolutely certain that this little girl is ours. Intended especially for us by the Maker Himself. And whatever the future holds for us, and for her, He knows. And that’s all we need to know.